After a summer of hard work up on the North Slope it was high time for a vacation to keep my sanity. Eddie was on an extended road trip in his Alaskan Adventure Support Vehicle and I seized the opportunity to meet up with him for two weeks of rock climbing in California. With much anticipation for hot bluebird Californian weather I set off for Reno where he picked me and transported us to Tuolumne for the first of our adventures.

Although I had been dealt a lesson a few years ago on my first excursion to Yosemite (I shivered under a sheet marveling that it got cold even in California until I admitted defeat and asked Lexi to please share her sleeping bag) I was still surprised at how cold it got. After watching Eddie disappear into the bowels of his warm queen size bed in the Support Vehicle I would hop into my tent where I would either freeze, have the tent blown over by hurricane force winds, have my tent poles break, get snowed on, or a combination of the above. Luckily for me Ricky-Bobby of cold-blooded Fairbanks pedigree had met up Eddie immediately prior to my trip down and had failed to complain (in my opinion a wonderful pastime, and if not wonderful then at least well practiced), a fact that Eddie would constantly remind me of from his plush perch in the Support Vehicle.

All complaining aside, Eddie and I worked through a mess of climbing during our first week in Tuolumne. We climbed two routes on the Mendlicott Dome (one of which topped out and we got to walk off with rock shoes, a lesson my toes remembered well), two routes on Harlequin Dome, the “50 Classics” Regular Route on Fairview Dome, Phobos, and a superb route on Eichorn Pinnacle. A week into the madness we were in need for a bit of rest and ready for a bigger challenge. 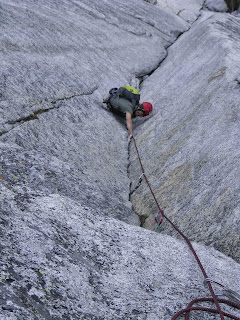 After getting snowed out Saturday night we decided to hike into the Incredible Hulk Sunday evening despite fresh snow and a warning that all the cracks were iced up. On the approach Eddie realized he had forgotten his sleeping bag but by then the ship had sailed and we pressed onward with a tent, tarp and hot water bottle to separate him from a cold few nights at 10,000’. Monday dawned clear and cold and somehow I got cajoled into leading the first pitch with socked crammed into my shoes and frigid fingers. As the day progressed we made slow but steady headway up the wall and as the light was fading crested the ridge where two snow chocked cracks separated us from the summit, and more importantly, the easy decent off the south side. The reality of single rope rappels off snowy icy granite in the dark with our tennis shoes set in and we hastily built anchors with all our most important and valuable gear. 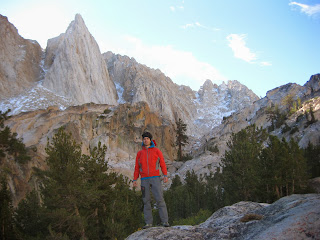 Growing weary of stuffing our scabbed hands into any more crack we took a rest in Clark Canyon to clip some bolts. After a fun day chillaxing and bouldering we woke to snow and immediately made the slip and slide trip over the hill and through the woods back to the safety of asphalt.
Now one thing is worth mentioning, Eddie loves his sport routes. Giddy with anticipation he piloted us towards Owens River Gorge where we spent a day climbing long steep slick bolts. I somehow ended up enjoying the dirty canyon spending the day studying pump management. 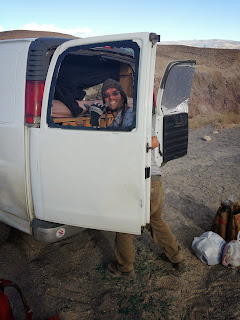 With the trip almost over we managed to have the wind help us shatter a window on the Support Vehicle and in true dirtbag style opted for plywood over glass for its replacement. For my last day we headed to Pine Creek where we climbed amazing granite sport routes in a clean beautiful canyon and didn’t stop until it was too dark to see the holds. 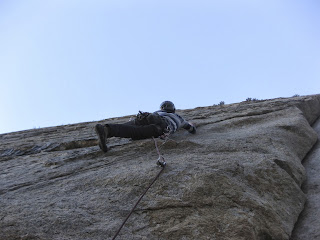 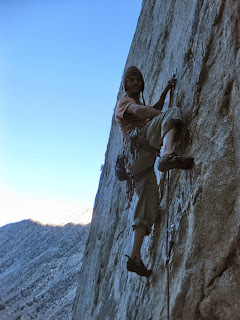 Many thanks to Eddie for the transport/rope gun services and keeping the stoke high for fifty some odd pitches!
Posted by John Giraldo at 6:32 PM 1 comment:


I have been too lazy to actually write anything up about my April trip so here goes.

I had unfinished business on Shaken not Stirred on the Mooses Tooth but as luck would have it Eddie and I flew into the Root Canal on April 18th in during a massive high pressure system. We immediately made plans to climb the next morning and were up at 4 am skiing to the start. This year the route was fat and we made easy progress up the cut steps. We didn't climb rock at all; a huge difference from my previous attempt. The crux pitch was by far the best pitch of the route and surprisingly steep! We decided to turn around at the Englishmans Col and were back to camp by 4 pm. 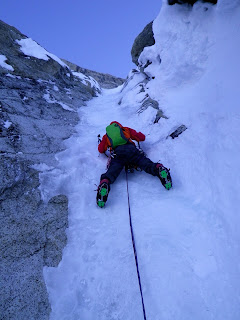 Eager to capitalize on the amazing weather window we called TAT and bumped over to the Tokositna on the 20th for our main objective, The Harvard Route on the iconic Mt Huntington. After taking a second rest day we set off early on the 22nd. Once again we found the conditions to be perfect and followed steps cut by a Polish team that had just returned the night before. Originally we were going to do the standard route but decided to follow the steps up the Westman/Puryear variation. While the wall looks big and intimidating we found the route snaked its way through all the difficulties and the climbing was never sustained. One thing is for sure, the Nose pitch reinforced my hate for aid climbing, belaying someone aiding is the perfect way to ruin a perfect day! 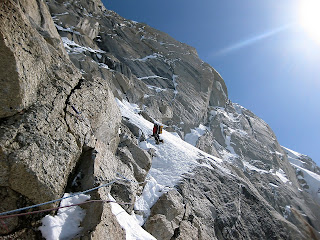